Lions and Tigers and Bears. Oh My! 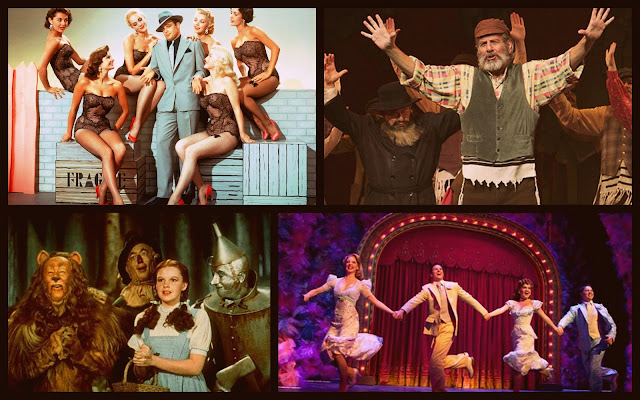 I've had this fascination with theatre ever since high school when I was forced to take a drama class as part of the curriculum. Every part of me wanted to run away from that class screaming - but I hung in there.
It's not like the class unearthed this hidden talent in the performing arts - far from it actually. Rather, it revealed a passion for the theatre. I was fascinated with it's history and it's intriguing culture. I had a really encouraging teacher in grade 10 who really pushed me to continue pursuing theatre. He introduced me to the production aspect of it and, for the next five years, that became a core part of who I was.

During my time in high school and university, I was involved in the productions of The Odd Couple, Joseph and the Amazing Technicolor Dream Coat, Fiddler on the Roof, MacBeth, AvenueQ, Guys and Dolls, Grand Hotel, and Follies. I got such a thrill from working back stage - coordinating rehearsals and production crews, managing props, calling the show, helping with set construction and marketing, and recording cues. It was exciting and I loved feeling like an invaluable part of the cast and crew as stage manager.

My love for musical theatre and theatre production has continued since then, and I find myself constantly having to bite the temptation to see every show that comes up in Toronto, Stratford, or K-W. For our one year getaway, we're headed to Niagara-on-the-Lake to see Guys and Dolls at the Shaw Festival. Did you know tickets there are only $30 for people under 30?! Heck yes! I also want to see Fiddler on the Roof in Stratford at some point and Wizard of Oz in Toronto. The thing is, tickets for these shows are so darn expensive! I can't bring myself to spend the money. That's why I'm constantly finding myself scouring Groupon and other discount sites for any deal I can get my hands on. Can't wait!
Posted by Stephanie